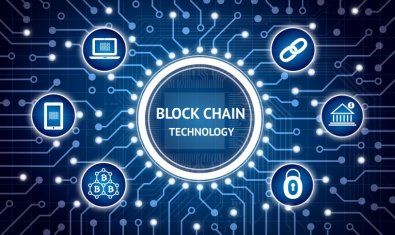 One of the hottest topics these days are cryptocurrencies (“cryptos”), such as Bitcoin. The noise created by cryptos is unfortunately currently stealing the thunder of its underlying technology, the so called blockchain.

Moreover, we believe that Cryptos are potentially close to peaking in terms of the “hype-cycle”. However, we are only at the beginning of grasping the wide-ranging potential of the underlying blockchain technology.

While this notion of “Cryptos: not so sure” vs. “Blockchain: disruptive” has already become somewhat of a consensus view amongst many academics, tech-entrepreneurs and venture capitalists, we’d like to share a couple of simple insights into the discussion.

Blockchain technology in a nutshell

Blockchain is sometimes referred to as the “Internet of Value”. In very simple terms, Blockchain is a decentralized database technology (also called distributed ledger) which is extremely effective at keeping records of “who owns what and how much of it”. The updated records are kept decentralized across a continuously reconciled network of databases.

While the Internet enabled us to seamlessly exchange information across the globe, the Blockchain could eventually enable us to effortlessly exchange ownership of assets.

Why does it matter?

Effective transfer of ownership is one of the key foundations of flourishing economic activity. Keeping records of ownerships is hence a pivotal function in market-based economies to ensure proper ownership transfer, protect owner’s right and prevent fraud.

Especially for high-value or “strategic” assets, such as property or currencies, the function of record keeping is performed by trusted government linked, backed or regulated entities such as central banks and property registers. In contrast to that, Blockchain does not require a middleman respectively centralized intermediary who keeps records of ownership, as performed in today’s world by banks, exchanges & clearing houses and land & property registers every time you make a bank-transfer, buy a stock and purchase a property, respectively.

But… how does is all actually work?

Now this is where the story becomes a bit… complex. Nevertheless here is our simplified understanding of a couple of key principles, using the Blockchain implementation underlying Bitcoin as an example.

First: Maybe the most intriguing feature of the Blockchain is how it creates trust, without being a well-known, trusted middleman. Blockchain gains this trust through an architecture and rules that make it practically impossible to defraud or hack it once it has reached a critical scale.

To start with, Blockchain by design sets a very high hurdle to initiate transactions respectively enter records of ownership changes. This high hurdle is imposed in terms of required computing power to collate and encrypt new transactions into so called transaction blocks and adding those to the Blockchain. Chances of doing so with limited computing power, e.g. your Macbook, within a reasonable amount of time, i.e. within your lifetime, are comparable to winning the lottery.

However, this implies that the Blockchain by design requires a lot of computing power to run effectively. This problem is addressed through a very deliberate architecture and rules, which incentivize rapid scaling of decentralized computing capacity, so called miners. The incentive for miners to perform critical tasks are newly issued Bitcoins as well as transaction fees paid by the initiator of transactions. Once a critical mass of miners have been attracted to the Blockchain, the chance of defrauding or hacking the system by individuals is negligibly small – a beautiful VIRTUOUS CYCLE.

Second: Blockchain keeps a public history of ALL transactions that have ever been initiated in chronological format, which get constantly checked, updated and verified. It turns out that this is an extremely effective way of keeping transaction records. With a full transaction history the Blockchain has at all times a complete picture of all ownerships across all participants.

… At its core the Blockchain is really a chain of digital signatures, which when unpacked represent a complete history of transactions, each one of which is verified of having been initiated by the actual asset owner. Moreover, it’s practically impossible to defraud the Blockchain and it runs on a fully decentralized peer-to-peer network.

The key question that follows is what does this mean for heavily intermediated sectors such as banking and perhaps more intriguingly what kind of “killer use-cases” beyond cryptos can be envisioned on the back of the Blockchain.

Subscribe to receive the latest developments on blockchain and see how we invest and build exposure to the future.

View all posts by blackb1rdcap1tal